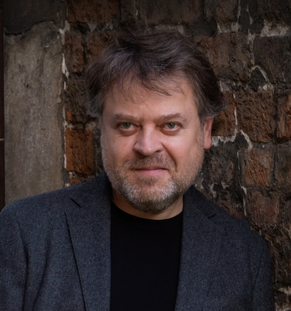 
Mark Kadin is Music Director of the Bulgarian National Radio Symphony Orchestra since September 2017. From 2004 to 2014 he was Music Director of the Krasnoyarsk Symphony Orchestra and from 1996 to 2004, Associated Conductor of the Russian National Orchestra. He has maintained a regular relationship with orchestras in about 30 countries around the world and has worked with top level artists such as Dmitry Khvorostovsky, Mikhail Pletnev, Maxim Vengerov, Vadim Repin, Boris Berezovsky and many others.
Mark Kadin received his musical training in Moscow at The Gnessin State Musical College and at a prominent Russian Academy of Music. While still a student he began his conducting career in 1990 as an assistant conductor of the State Youth Symphony Orchestra “Young Russia” and the Moscow Ensemble of Contemporary Music. He subsequently became associate conductor of the Moscow Radio Concert Orchestra.
In 1996 Mikhail Pletnev invited Kadin to become Assistant Conductor of the Russian National Orchestra, where he served until 2004. He worked closely with Valery Gergiev, Mstislav Rostropovich, Michael Tilson-Thomas, Kent Nagano, Evgeny Svetlanov. At the invitation of Vladimir Spivakov he became Resident Conductor of the State Chamber Orchestra Moscow Virtuosi from 1999 to 2003. Kadin has conducted annually about 30 concerts in Russia, notable leading the orchestra on European tour to Switzerland, Netherlands and Germany including concerts at the Kolner Philharmonie, Tonhalle Duesseldorf and Munich-Herkulessaal.
Kadin was Principal Conductor and Artistic Director of Krasnoyarsk Symphony Orchestra from 2004 to 2014, where he was responsible for the success and growth of the orchestra. He has been increasingly recognized for his original programming and interpretation of the Russian repertoire and his search for a purity of orchestral sound. His repertoire has expanded over the years to extend well beyond the usual core classical pieces to also encompass Sibelius, Elgar, Dvorák, Mahler as well as introducing audiences to the music of contemporary composers. All the symphonies of Beethoven, Brahms, Tchaikovsky, Rachmaninoff as well as all the most important works by Shostakovitch, Prokofiev, Rimsky Korsakov and Mussorgsky were performed in Krasnoyarsk. In addition to conducting 40 symphonic concerts each season Kadin established a groundbreaking Summer Open Air Festival in Krasnoyarsk and other cities in the Siberian region attended by tens of thousands of spectators since 2011. He led the orchestra on three Asian tours to China and Korea with concerts in prestigious concert halls including the Seoul Art Center.
His numerous collaborations with Russian orchestras include concerts with the Russian National Orchestra, the Moscow Symphony Orchestra, the Russian Philharmonic and the orchestras of Novosibirsk, Samara, Volgograd, Voronej, Khabarovsk, Omsk, Irkutsk, Rostov. As guest conductor Kadin has worked with various orchestras in Europe, Asia and South America including the Rome Symphony Orchestra, Queensland Symphony Orchestra, Cyprus Symphony Orchestra, the Slovak Radio Symphony Orchestra, the Sofia Philharmonic Orchestra, Moravian Philharmonic Orchestra, Filharmonia Artur Rubinstein, Istanbul State Orchestra, Macedonian Philharmonic Orchestra, Israel Sinfonietta, Orquesta Sinfonica Nacional de Costa Rica, Orquestra do Parana, Orquesta Sinfonica de Yucatan, Xiamen Philharmonic, Gyeonggi Philharmonic Orchestra and others. His recent activities with Bulgarian National Radio Symphony Orchestra include participation in prestigious national festivals – Sofia Music Weeks, Varna Music Summer and critically acclaimed tour to South Korea with concerts in famous World Orchestra Series 2018.
Kadin has collaborated with many top level soloists such as Dmitry Khvorostovsky, Sumi Jo, Maxim Vengerov, Vadim Repin, Mikhail Pletnev, Viktor Tretyakov, Boris Berezovsky, Nikolay Lugansky, Denis Matsuev, Alexander Knyazev and many others. 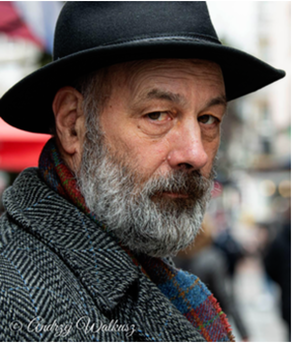 Prof.  Alan Fraser - Serbia
​
​Canadian pianist, pedagogue and author Alan Fraser is best known for his books linking piano technique to the Feldenkrais Method. A student of pioneering pedagogue Phil Cohen in Montreal and the virtuoso Kemal Gekić in Yugoslavia, he is a trained Feldenkrais practitioner who has presented at numerous
music conferences worldwide and published articles in most of the major piano journals. He has performed in North America, Russia, China, Yugoslavia and many European countries, and leads regular seminars at his Alan Fraser Piano Institute in many North American and European capitals. His latest publication is Pianimals, a new children’s method with Phil Cohen-Feldenkrais style exercises to quickly improve a young pianist’s technique and musicianship. 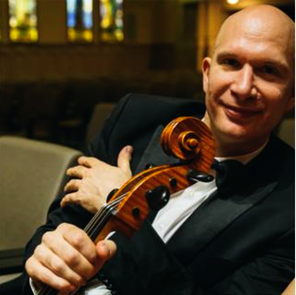 ​Born and raised in the UK, cellist Gabriel Prynn is a founding member of the Trio Fibonacci, which celebrated its 20th anniversary in 2019. His most influential teachers were Clive Greensmith and David Finckel.
During his career as a soloist, as a member of the Trio Fibonacci, and as a guest artist with diverse ensembles, notably the Ensemble Alternance in Paris, Gabriel has both resurrected forgotten masterpieces and premiered over sixty new works. Gabriel has performed at Toronto’s St. Lawrence Centre, Merkin Hall in New York, at the Musée d’Orsay in Paris in association with IRCAM and Radio-France, at the Aldeburgh Festival (UK) and at the Forbidden City Concert Hall in Beijing. He has been both a resident artist and Chamber Music Coordinator at the Atlantic Music Festival (Maine, USA) since 2016.
​
Dr. Prynn is passionate about teaching, and in addition to his position as Visiting Assistant Professor of Cello at Ohio University, USA, from 2016-2019, he has given masterclasses, coached chamber music, and given workshops at such prestigious institutions as the École Normale de Musique (Paris), University of South Africa, University of Curitiba (Brazil), Royal Academy of Music (UK), Conservatory of Belgrade (Serbia), Conservatory of Nagoya (Japan), Hochschule Hanns Eisler (Berlin, Germany) and at the University of Oxford (UK).
Gabriel has collaborated with some of the most respected composers of our time, notably Mauricio Kagel, Pascal Dusapin, Jonathan Harvey, Georges Aperghis, Hannah Lash, George Tsontakis, Pierre Jalbert and Henri Pousseur. Gabriel’s doctoral research at the University of Montreal led to his book Taming the Cello: a handbook of contemporary cello for performers, teacher and composers. Excerpts were published in the December 2018 edition of The Strad. 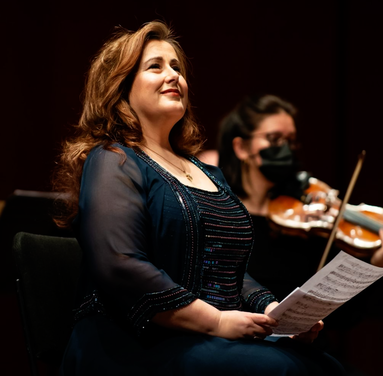 Prof. Aline Kutan (Canada)
​
Canadian Armenian soprano Aline Kutan has established herself as a versatile and refined artist in both opera and concert. She is consistently acclaimed for her crystalline voice, amazing vocal virtuosity and powerful scenic presence. Her musical training began with tenor David Meek shortly after immigrating from Istanbul to Vancouver at age 10.
At 18, she sang the role of Flora in Vancouver Opera production The Turn of the Screw by Britten. Later she attended UBC and then worked with Louise André at l'Université Laval in Quebec City.
Ms. Kutan is grateful to the scholarships received early in her career from Jeunesses Musicales, Joseph Rouleau, George London, Licia Albanese, COC, Vancouver Operatic Society, Toulouse Int'l Voice Competition and the Canada Council. In 1995, she won the prestigious Metropolitan Opera Auditions and a year later made an impressive debut as Lakmé in Arizona Opera. With over 30 roles such as the Queen of the Night, Zerbinetta, Olympia, Konstanze, Violetta, she has dazzled her critics and audiences. She has sung at l'Opéra de Paris, Glyndebourne Festival, Chorégies d'Oranges, Geneva, Marseille, Monte Carlo, San Carlo di Napoli, Teatro Colon in Argentina, Teatro de Santiago Chile, Capitole de Toulouse, Canadian Opera Company, Michigan, Arizona, New York City Opera, among others. She's created the role of Pasiphaé in Philip Fénelon's world premiere of Les Rois in Bordeaux and sang in Europa Riconosciuta at La Scala di Milano. She performs regularly with the Montreal Opera and sang Nanetta last year in their production of Falstaff.
Since winning the MSO Voice Competition in 1993, she's performed with them such works as Gliere's Concerto for a coloratura Soprano, Mozart's Mass in C Minor and Concert Arias, Ravel's L'enfant et les Sortilèges, Stravinsky's Mavra and Rossignol, Mahler's 8th symphony, the Angel in the Messiaen's St. Francis of Assisi. Recently, she was heard in Carmina Burana with Kent Nagano conducting at the Olympic Stadium.
Besides collaborating with chamber music ensembles and preparing recitals, Ms, Kutan also teaches at the Conservatory in Montreal and the McGill Schulich School of Music. She has several recordings of chamber music and opera under the Atma, Analekta and Sony BMG labels. 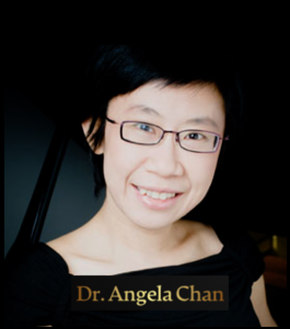 ​
Dr. Angela Chan Ph.D.  - (Canada)
​
Recognized as the great-grand student of Alfred Cortot (from the lineage of Frederyck Chopin), Dr. Angela Chan is an accomplished concert pianist who has performed extensively in Canada, Europe, the U.S.A. China and Hong Kong, and has been featured on the Discovery Channel (Canada), Global TV, CBC, CBS, MSNBC, the Australian Television Network, CJAD, CJOH, RTHK (Radio Television Hong Kong) and other media networks. Dr. Chan’s works have also been featured in Maclean’s Magazine, La Scena Musicale, Montreal Gazette and the National Post. Angela Chan holds a Doctorate in Piano Performance, Pedagogy and Education from Concordia University, Montreal, and she is the founder and Director of Lambda School of Music and Fine Arts, an internationally recognized institution for its fine quality and reputation. Dr. Chan is also head of the piano pedagogy division at Lambda School, providing professional and career development opportunities for piano teachers. Dr. Chan has a wealth of experiences in helping students achieve their maximum potential, and has groomed numerous child prodigies in her career. In her 38 years of extensive music and psychological research, Dr. Chan has unraveled the mysteries of effective and efficient teaching and learning. As a consequence, within short periods of study with Dr. Chan, many of her students have demonstrated phenomenal progress.

​Dr. Chan's students have won first prizes in national and international piano competitions and have been invited to perform at the prestigious Carnegie Hall in New York, the Royal Albert Hall in London (United Kingdom), as well as in Amsterdam (Holland), Rome (Italy), Vienna and Salzburg (Austria), Brussels (Belgium), Bonn (Germany), China, Japan and Hong Kong. Dr. Chan's students have been highly successful under her guidance - they have been accepted by prestigious universities in the US and Canada, including the New England Conservatory, Peabody Institute of Music, Cleveland Institute of Music and the Manhattan School of Music in New York, as well as McGill University in Canada.  Dr. Chan's pedagogy students have become outstanding piano teachers, whose students have won international awards.

Dr. Chan is also the author of the new Lambda piano method series developed to help pianists progress at an accelerated pace. Dr. Chan’s book A Guide to Musicality - The Art and Science on her research and experiences with innovative pedagogical approaches has also been released in July 2020. Recognized internationally as an outstanding pedagogue, Dr. Chan has been invited to adjudicate a number of major competitions in Canada, China, Europe and in the US.